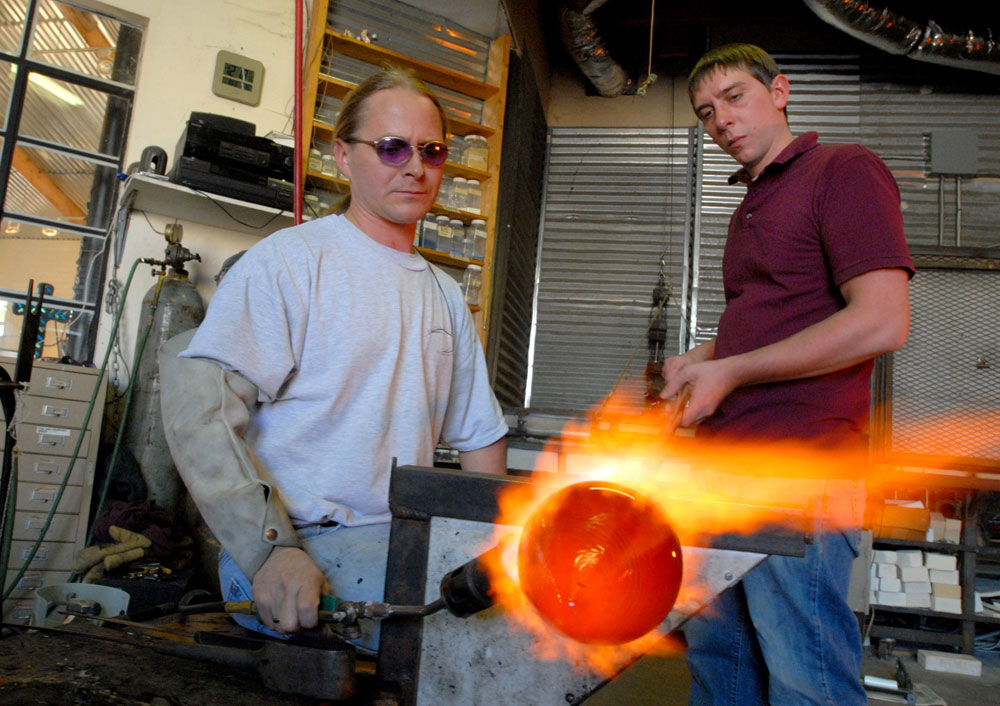 Red hot, molten glass reflects in the lenses of bright yellow sunglasses, worn by a man who carefully spins a long, steel pipe. The roar of a furnace fills the room, as does the heat that emanates from its more than 2,000 degree temperature.  As he twirls the pipe, the molten glass on the other end cools and takes shape in the same way an earthenware vase might result from a potter’s movements.

For exactly 10 years, Vetro Glassblowing Studio & Gallery has produced glass arts – combining both form and function – that have found their way into Dallas and Fort Worth medical centers, homes nationwide, galleries and a prince’s palace in Saudi Arabia.  “Glass is so mystical,” said David Gappa, owner of the Grapevine studio. “It’s been around for centuries. Everyone experiences glass, we know what it is – we have a glass of water – but none of us has a clue about how this art form originated. Most of what we do here is purely educating our general public about what this art form is, what glass is.”

Gappa and his staff of five glass blowers and four who tend to the gallery oversee an operation that involves precious metals, extreme temperatures and an art medium that is growing in popularity and yet, for the most part, no different than it was in Italy all those centuries ago. (The studio’s name, Vetro, is ‘glass’ in Italian.)

“I’ve always been an artist,” Gappa said. “From age 5, I was painting, drawing, sculpting. I had full intentions of becoming a painter and throughout my studies in school that drew me toward engineering and then architecture.”  When finishing up his last years at University of Texas at Arlington, securing a master’s degree in architecture, he took several glass classes just for fun when they first were being offered at the university.  “It really grabbed hold of my heart just full force,” Gappa said.

Gappa worked in architecture for 10 years at Fort Worth’s Quorum Architects Inc., all the while pursuing his appreciation for glass arts on the side – building machines, organizing a co-op to help with costs, perfecting his craft. One month ago, he stepped down from Quorum Architects to pursue the trade full-time without distraction.  “So, here we go,” he said, laughing.

Vetro Glassblowing existed for five years about a block off Main Street. Eventually, it made known its intentions to expand, possibly with a move into other cities, Gappa said, but the city of Grapevine stepped up to secure its ongoing presence by rehabilitating an old farmers’ market into the glass studio’s present home.

The layout of the studio is three-fold: exposure, education and experience. Visitors can peruse the range of glass pieces at the storefront, such as vases, chandeliers, paper weights, decorative vessels and jewelry. They can learn about the process by taking a seat on the bleachers facing the production area, where artists might be producing a large-scale installation or something smaller. Or, they can take part in the process, too. For example, guests can make their own Christmas tree ornament for $25.

Working with glass involves patience, concentration and the acceptance that the medium often can have a mind of its own. (The occasional burn is a part of the process, too.) Pieces can take anywhere from 30 minutes to several hours to produce, but then they must be placed in an annealer, which slowly cools them from more than 900 degrees down to ambient, for about half a day’s time. It’s a complicated process.

“Glass is by far one of the most difficult mediums to master and to work through because of the expediency of it,” Gappa said. “One mistake can cost you a lot of time, money and effort.”  Sometimes, gallery visitors will admire the glass works, but cringe at the price tags, often in the thousands of dollars. Confusion sets in, Gappa said, and they wonder how anyone could charge so much for a particular piece. Then they make their way through to the production room, where they might sit and take it all in for a moment.  “They see Kevin or myself or one of my other staff members rolling that molten form, they’re completely awed by what that medium is,” Gappa said. “And then as they start going out the door, they look at the same piece they just balked at and say, ‘You know what? I will never be able to afford that piece, but I completely understand and value what that vessel is now.’ That means the world to us.”

Latest From the Blog 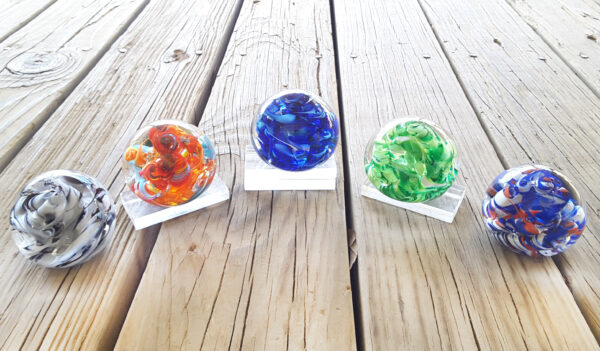 Back To School Paperweights

Vetro Glassblowing Studio presents to make your own beautiful handmade paperweight!  These one-of-a-kind glass art pieces are perfect gifts for teachers. They also can add an element  of elegance to your own students’ new learning space or your home or office.  All ages welcome!